Lets talk about whats unhealthy for the growth of PTCGO 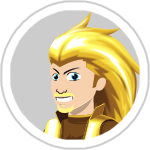