What rare did you pull in the last booster pack you opened? 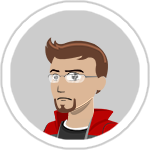