"Show All" on the items tab reveals some rather interesting stuff... 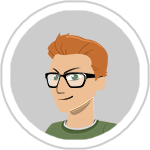