When taking achievements in to account for sleeve prizes 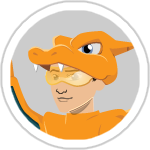