Looking for suggestions on how to improve my Fire Electric Deck 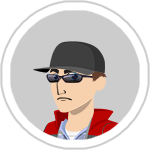