Opponent given loss via idling when wasn't idling 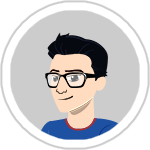