for those who uses Bianca, bicycle, and Electrode ability. 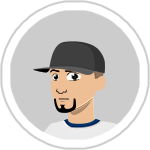